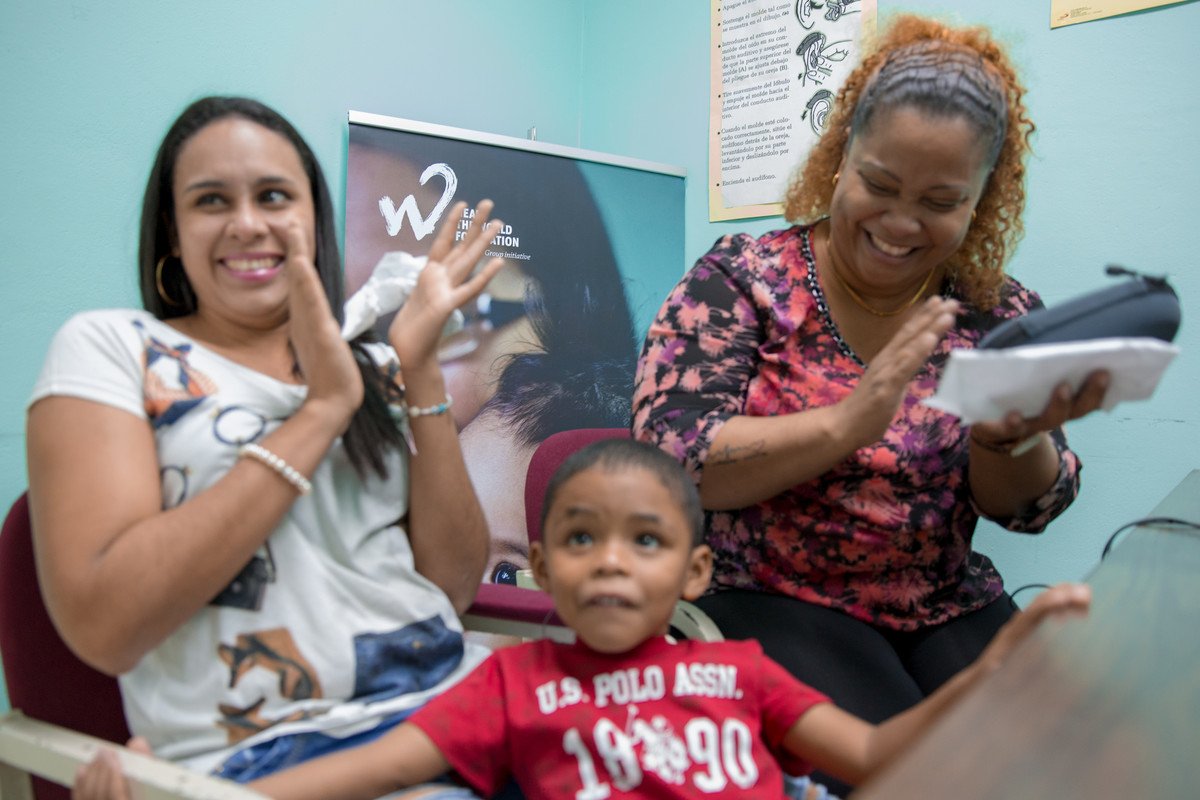 hearing implants for children in panama

Thanks to a Cochlear Implant the three year old Isai from Panama can hear - despite his profound hearing loss. Find out more here. Get involved.

Thanks to a cochlear implant (CI), Isai from Panama can hear again. This three-year-old boy has lived with profound hearing loss since the age of one. The hearing implant that he has received from the Hear the World Foundation enables Isai to hear and to learn to talk, thus giving him a chance to get an education and to lead a life without limitations. However, he still has a lot of practice to do before he will be able to articulate correctly: without professional speech therapy, along with his parents’ time and assistance, this would be impossible.

In 2017, for the first time in its ten-year history, the Hear the World Foundation made hearing possible for three needy children with profound hearing loss in Panama, by means of donated cochlear implants. In January 2018, implants were successfully activated for four more children – one of whom is Isai. Now, the focus is on professional follow-up care: speech therapy and regular audiometric tests – a key component of the Hear the World Foundation’s commitment.

Out of silence – into the world of sounds

Isai concentrates and listens inwardly – then he suddenly starts beaming: he hears a sound – finally! This is the moment when his cochlear implant, inserted six weeks earlier, is activated. The Hear the World Foundation travelled to Panama, together with CI experts from the Sonova subsidiary Advanced Bionics, to oversee the activation. For Isai and three other children in need, all aged between two and four, this day marks the beginning of a new chapter in life: they can now hear, which gives them a chance to acquire speech, to obtain school education and to live independent lives.

Isai was born with healthy hearing. Due to the fact that he was a premature baby, Isai was given medication, but this damaged his hearing so severely that he suffered profound hearing loss as a consequence. This came as a shock to his family, who come from a poor background. Like many families in Panama, Isai’s family was unable to raise the money for an implant and the state health insurance let them down. Thanks to the help of the Hear the World Foundation, the complicated procedure was carried out professionally, at no cost to the family.

Sustained commitment: learning to hear and speak with a CI requires a lot of training

“CI donation is a major challenge because alongside the surgical procedure, it also calls for particularly intensive follow-up care,” says Elena Torresani, director of the Hear the World initiative. “We are glad that we can count on the know-how of Advanced Bionics here.” Not only do the experts support the project on site and oversee the activations, they also pass on their comprehensive knowledge to local project partner FUNPROI’s audiologists in Panama, so they can monitor the CIs and conduct speech therapy. Isai will now also have three speech training sessions a week. This is because Isai now has to acquire what hearing children learn quite naturally in the first years of their lives. In order for the learning to be a success, the parents also have an important role to play: they are taught how to handle CIs and are given tips on how they can playfully assist their children at home. With all these measures, the Hear the World Foundation not only makes it possible for children to hear, but also guarantees sustained audiological all-round care in compliance with international standards.

The hearing care in Panama does not meet everyone’s needs

Although Panama is one of the richest countries in Latin America, it is characterized by economic injustices: 26 percent of the population live in poverty. Although the state healthcare system is making considerable progress in hearing care, it only covers the costs of hearing solutions and speech therapy for a fraction of the poor population. For this reason, many people set their hopes on the help of FUNPROI, one of the country’s few institutions that bridges this gap in state healthcare and provides professional hearing care for needy children and youths with hearing loss, free of charge. The Hear the World Foundation has been assisting FUNPROI since 2013. With hearing solutions, funds and expertise, hundreds of children have already been helped so far. 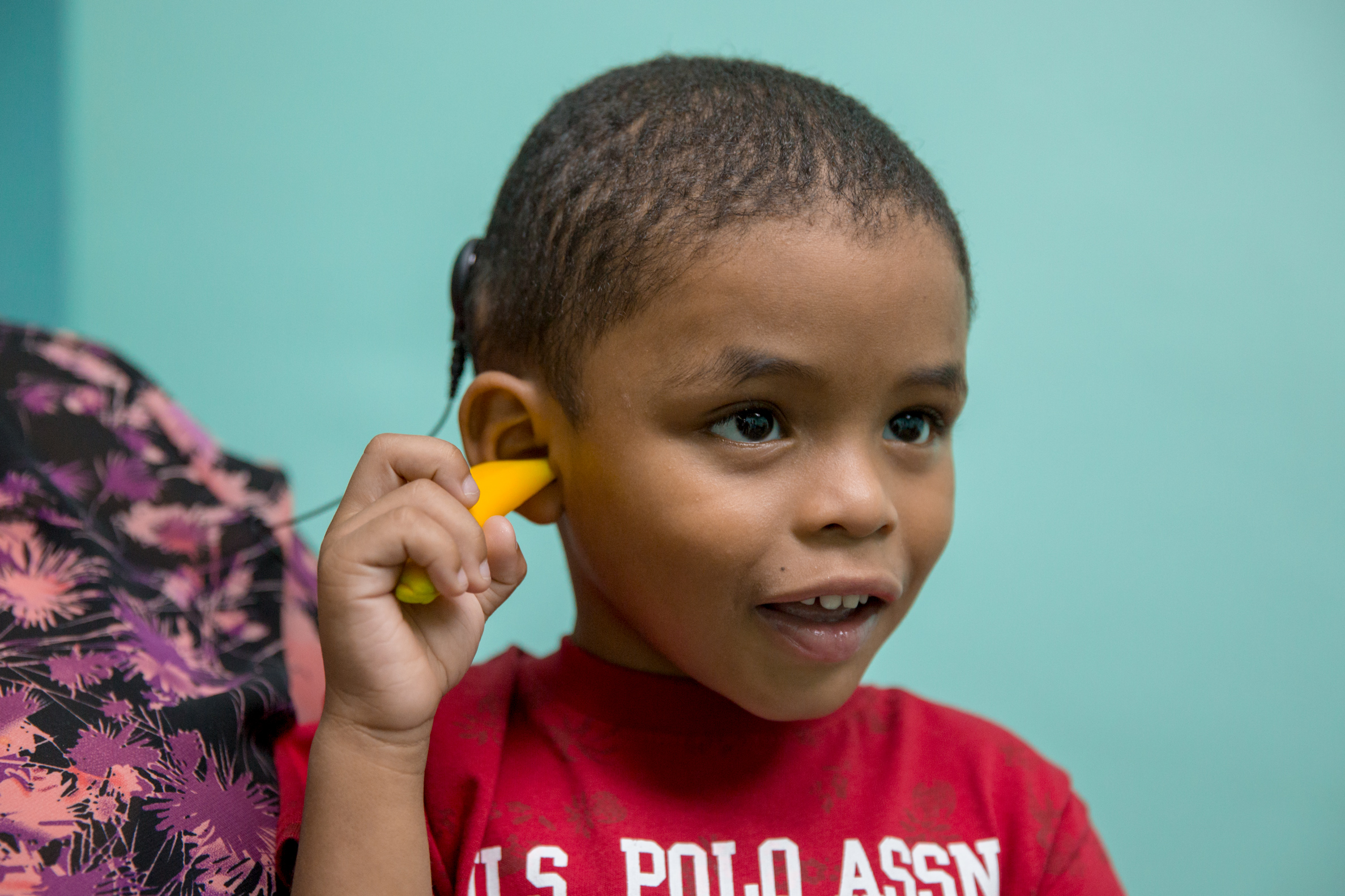 Isai, three years old from Panama is one of four children from Panama who received a hearing implant by the Hear the World Foundation. 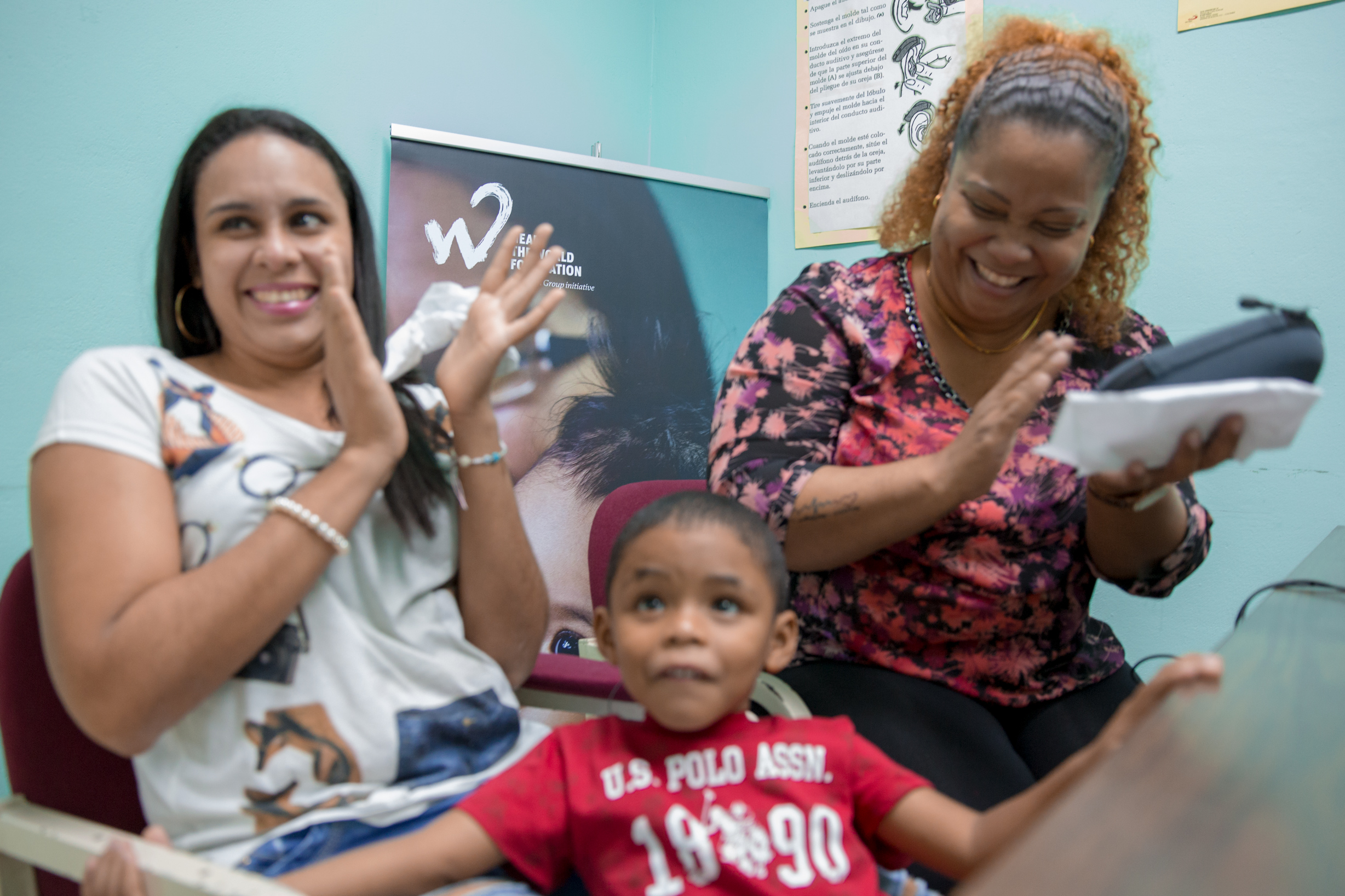 Isai, his mother and aunt are all overwhelmed: Isai can hear. 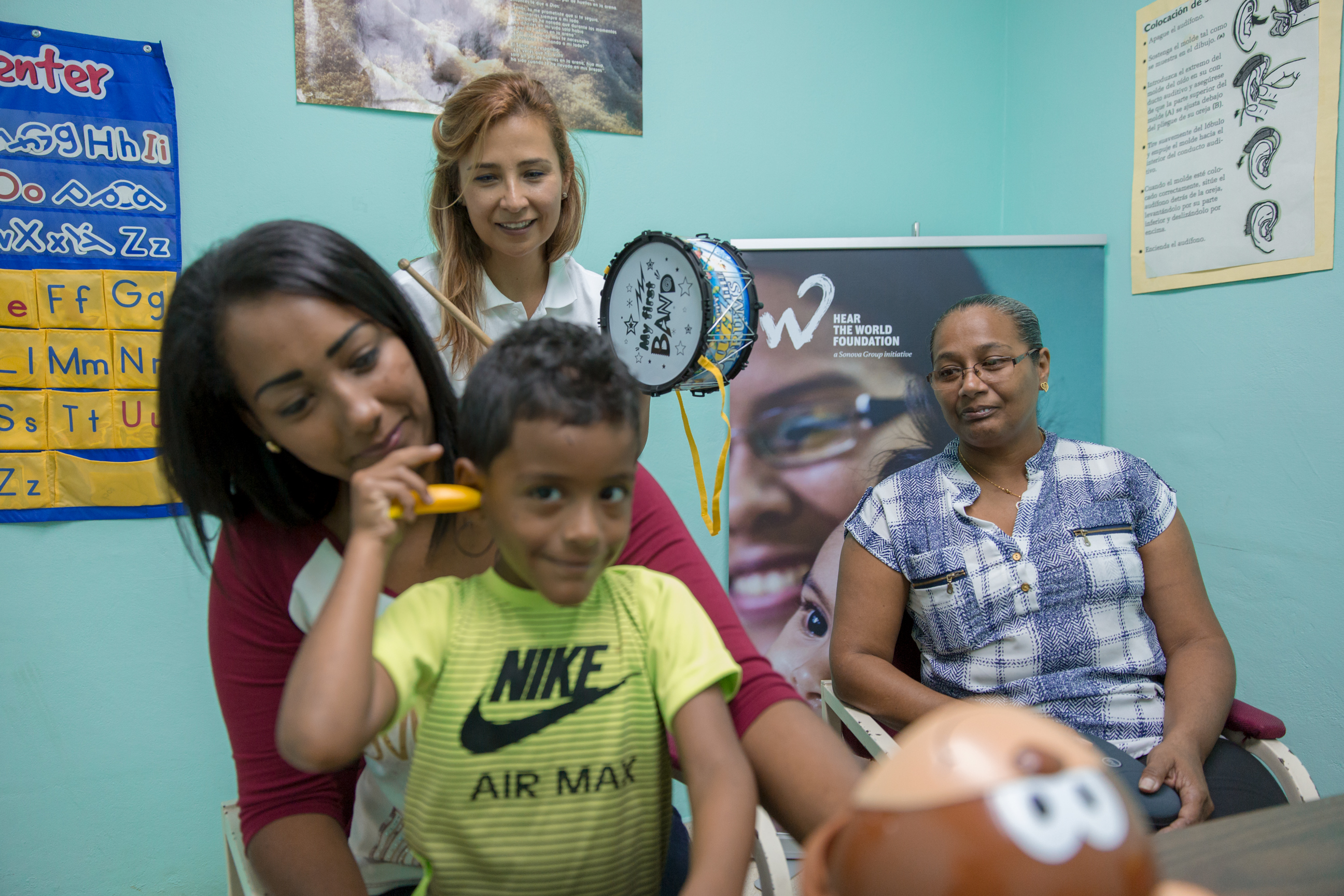 Also Moises can hear for the first time in his life and reacts to sounds around him. 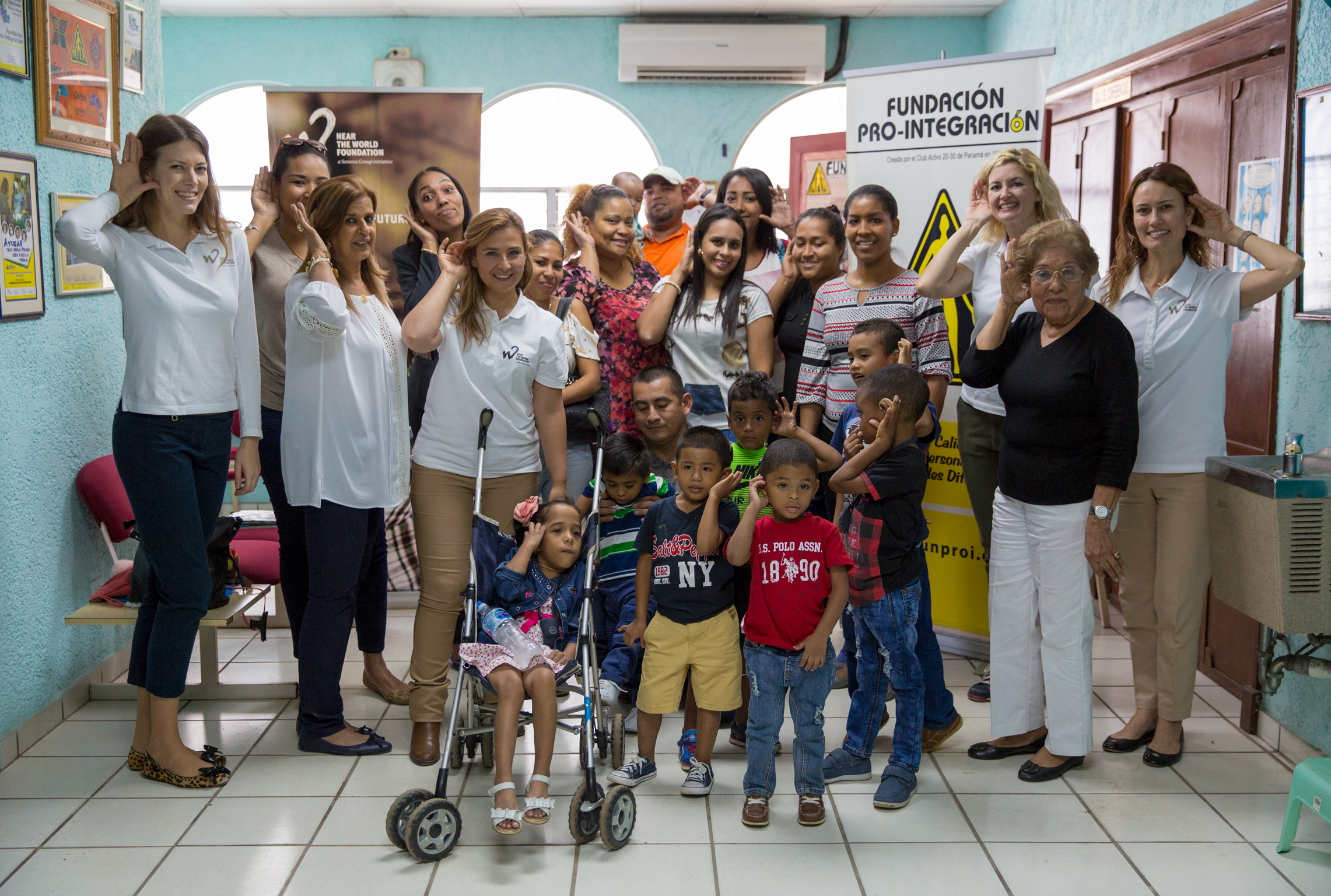 The implant recipients with their parents, the project team (Funproi, Advanced Bionics and Hear the World volunteers).